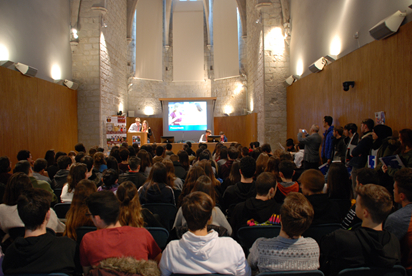 X Philosophy Conference 2018 "Friendship, for what?"

On 14 December 2018, the X Philosophy Conference for Secondary School students took place, organised with the aim of commemorating World Philosophy Day established by Unesco. For months beforehand, the conference was prepared under the coordination of Prof. Xavier Serra, and with 15 representatives from secondary schools in the counties of Girona. 265 students in the 2nd year of Bachillerato from six secondary schools in the counties of Girona worked for weeks on the virtual campus filoara.cat/jf18 on this year’s theme: “Friendship, what for?”.

The programme of the conference (see) included inter-school debates, audiovisual presentations and student papers, a keynote speech and musical performances. The programme was held at the Faculty of Letters of the University of Girona and in the Auditorium of La Mercè.

This year’s event focused on the meaning of friendship, its limits and its presence, which is necessary both for coexistence and for achieving happiness. The students analysed classical texts by Plato, Aristotle, Epicurus and Cicero on this subject, but also the specific contributions of Thomas Aquinas, Montaigne La Rochefoucauld, Kant, Nietzsche and Derrida. A veritable pre-university congress work.

Among the audiovisual documents that were analysed were the episode “L’amistat” (the friendship) of the programme “Amb filosofia” (TV3), fragments of “Merlí” and the American independent film, “The Kings of Summer” (Vogt-Roberts, 2013).

On the 14th there was a megafòrum with 21 different teams of students from the different Institutes, around the origin and limits of friendship. In the second part of the day, in addition to the awards for the best student papers, there was a presentation given by Prof. Ramon Alcoberro (UdG) entitled “Friendship: from Epicurus to the time of fake news”.