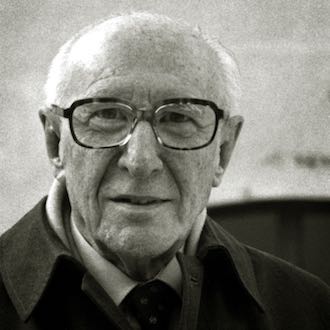 Lluís A. Santaló was born in Girona in 1911, but spent most of his life in Buenos Aires, where he continued his studies and research in the field of mathematics until his death in 2001

He earned his doctorate in Mathematical Sciences in Madrid and he later studied in Hamburg, Chicago, Princeton and Paris. From when he arrived in Argentina he was a professor at different universities across the country (Rosario, La Plata and Buenos Aires) where he enjoyed a great prestige as an innovator of education.

Lluís A. Santaló was always greatly concerned about pedagogical topics and mathematics and science teaching. He participated actively in the general renovation of mathematics education, especially at secondary level, and was the president of the Interamerican Committee for Mathematical Education. He was also a Member of the National Academy of Education of Buenos Aires.

Regarding his role as a researcher, he wrote more than 130 original research papers, which were published in scientific journals around the world, as well as books and monographs on different domains of mathematics. He was recognized as one of the great geometers of the century (Integral Geometry and Geometric Probability (1976)), but also made original contributions to unified field theory and studies on the history of mathematics.

Due to his great contribution to mathematics, Professor Santaló received many international recognitions and honorary degrees. He was an Academic of the National Academies of Sciences of Lima (1945), Madrid (1955), Buenos Aires (1960), Córdoba (Argentina) (1961) and Chile (1986); he was Doctor Honoris Causa by numerous universities; and he was awarded the First National Prize for Culture of the Argentine Republic (1954), the Mibashan Prize (1968), the Severo Vaccaro Foundation Prize (bienni 1977-79), the Prince of Asturias for Scientific and Technical Research (1983 ), The Narcís Monturiol Medal for Science and Technology (1984) and the Inter-American Prize for Sciences ‘Bernardo Houssay’ (1986).
Lluís A. Santaló was, ultimately, ‘an example of a life devoted entirely to science without hurries and without pauses, without exaggerating or claudicating’ (Magazine of the Mathematical Union of Argentina). 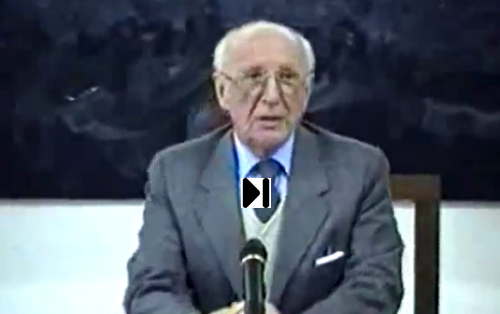 Clicking here  you can also see the conversations between Lluís Santaló and Josep-Maria Terricabras. The mathematician tells about his experiences since childhood, talks about his family, school and training as a mathematician.

Complementing the seminar offered by Prof. Santaló, the Ferrater Mora Chair organized three conferences, open to the general public, at the La Mercè Cultural Center, under the generic title La Matemàtica ahir, avui i demà, with the following program (pdf): 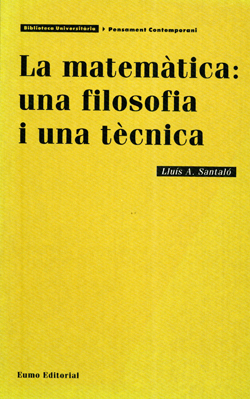 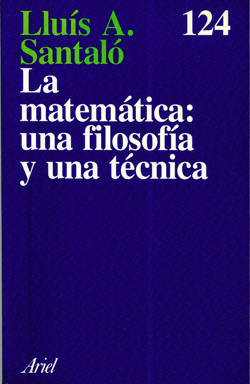 Click here to read the press summary on the death of Luis A. Santaló.