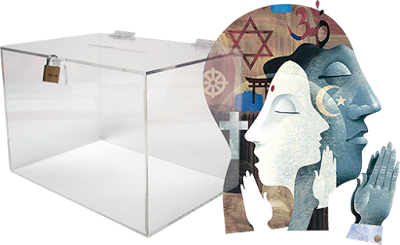 Can religion contribute to democracy?

On Friday 3 March 2017, the conference Religion, can it contribute something to democracy? was held at the Faculty of Arts of the University of Girona and the Josep Irla Auditorium of the Government of Catalonia in Girona.

The conference had two distinct parts, one of an academic nature and the other of a more civic nature. At 9.30 am, the results of the study on Religious Diversity and Laicism in Schools and Hospitals in the City of Girona, prepared by the Research Group of the Ferrater Mora Chair of the University of Girona, financed by the RELIG 2015 grant from the Directorate-General of Religious Affairs of the Government of Catalonia, were presented. Afterwards, Rafael Díaz-Salazar (Universidad Complutense de Madrid) and Montserrat Coll Calaf (former Director General of Religious Affairs of the Generalitat of Catalonia 2004-10) presented two papers (Public Religions for Secular Democracy and Contributions of Religion to Democratic Culture, respectively) and in the afternoon a series of specialists in the study of religious diversity defended a communication.

In the second part of the day a round table was held (see) in which Antoni Puigverd (journalist), Mar Griera (sociologist, UAB) and Manuel Delgado (anthropologist, UB) took part. As the aim of the round table was to move the debate to the city of Girona, the activity took place in the Josep Irla Auditorium of the Generalitat de Catalunya (Plaça Pompeu Fabra, 1 - Girona), at 19.00h.

The research project addressed a series of questions related to democratic society and the participation of religions in it: Should a secular state maintain an attitude of non-indifference towards religions? Can religions make a positive contribution to the functioning of democratic society? If we can expect positive contributions, should institutions encourage or facilitate their worship? Should they be made (more) visible? In a democratic, liberal and pluralist political context such as Catalonia, is it good for religious denominations to have facilities from the institutions to make themselves present in the public sphere? In the city of Girona, in two institutions as important as schools and hospitals, what attitude towards religious diversity can be detected?

See the articles that have appeared in the Diari de Girona and in El Punt Avui about this report.