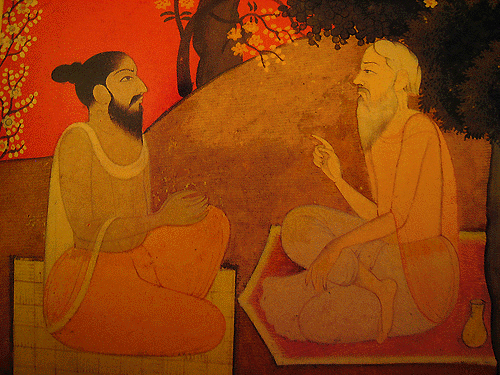 The course was a first approach to the philosophical wisdom of India, although it started from the fundamental texts of the Vedic revelation - the Vedas, the Upanisads and the great Hindu synthesis of the Bhagavad-Gītā- where the fundamental principles of the Indian cosmovision are drawn: Ignorance (avidyā) of who we are, holds us prisoner with the erroneous and painful identification of body-mind (duḥkha), although falling into the illusion (maya) of taking appearances for reality; this, leads us to act (karma) compulsively moved by desire (kama), which keeps us tied to the endless spiral of birth and death (saṃsāra); but with discrimination (viveka) and knowledge (jñāna), following the path of union (yoga), the self (ātman) although realising it, can awaken (buddha) and free itself (mokṣa , nirvāṇa).

Like all philosophical traditions, Indian thought also displays an ontology, epistemology, anthropology, ethics, politics, aesthetics… We will see the formation of the orthodox schools of Hinduism: nyaya, vaiśeṣika, sāṃkhya, yoga, Mimamsa and vedānta; as well as the heterodox ones: Cārvāka, Jainism and especially Buddhism, from the Buddha of the Four Noble Truths, to the appearance of the Theravada and Mahayana Buddhisms.

There was a tasting of the great masters of the customs tradition (Advaita), the Buddhist Nāgārjuna, the Vedantic Sankara and the Tantric Abhinavagupta, ending with a brief overview of neo-Hinduism and the contemporary Vedantic sages Ramana Maharshi and Sri Aurobindo.