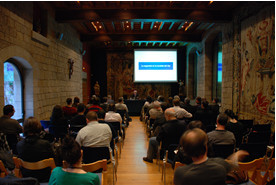 Security in the risk society

From 17 to 28 January 2011 the intermíting ‘Security in the risk society’ took place, directed by Jaume Curbet, a recognised expert in security issues, with the aim of facilitating the development of a broad and deep understanding, from an integral and evolutionary vision, of the psychosocial mechanism that articulates, as a whole, the production of insecurity and security in the risk society (see the press dossier).

You can access the course materials by clicking here.

Risks -which lead to accidents and disasters- and conflicts -which result in violence- can only be effectively controlled when preventive action is taken, through a fertile and sustained combination of action-oriented reflection (analysis) and reflective action (management). In this way, when intervention is made to minimise the damage caused by accidents, disasters and violence, it also ensures that the solution does not end up aggravating the problem.

A proper analysis allows us to see clearly, in an integrated view, the different perspectives offered by any insecurity problem we have to face: the actors, the risk factors, the vulnerabilities, the processes, the causes, the consequences; but also the security policies that aim to solve them and their real effects. This presents institutional and social actors with the challenge of deploying two capacities: that of investigating the presence of new risks and conflicts in the course of solving the old ones; and that of explaining the intuition, arising from experience, that a risk or a conflict is about to enter the cul-de-sac of disaster or violence.

Jaume Curbet, director of the intermíting, who unfortunately died on 16 May 2011, was a renowned expert on the subject, capable of contributing an ever-renewed perspective and also of providing tools and ideas to better understand and focus on an issue of great importance for personal and collective life. He was director of the online Master’s Degree in Public Security Policy at the Open University of Catalonia (UOC) and the Institute of Public Security of Catalonia. He is an associate researcher in the field of public safety at the Institute of Regional and Metropolitan Studies of Barcelona, of the Autonomous University of Barcelona. He previously directed the Catalan Risk Observatory and the journal “Sustainable Security” and was an associate lecturer at the Criminology Department of the University of Girona. He was a member of the international scientific committees of URVIO (“Revista Latinoamericana de Seguridad Ciudadana”, FLACSO Ecuador), and of the journal “Cahiers de la Sécurité” (INHES).

It should also be noted that the seminar included the presentation of Jaume Curbet’s book “Un mundo inseguro. La seguretat en la societat del risc” (An Unsafe World. Safety in the Risk Society), which was presented on Friday 21 January at the Fontana d’Or, and which had great public and media coverage.