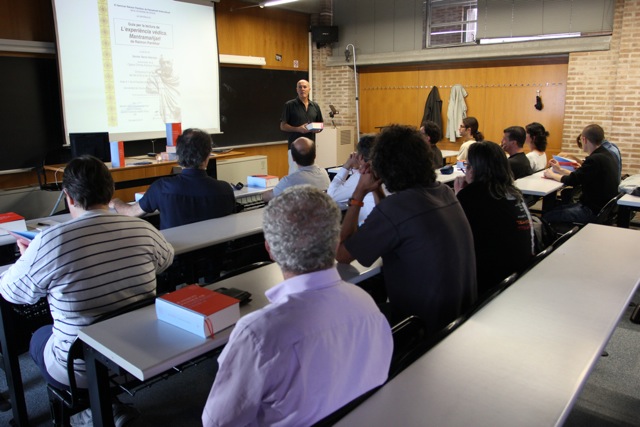 The Vedic experience can perhaps refresh a man’s memory of his life on earth; it can remind him that he, like his ancestors, has accumulated the most extraordinary experiences and attained a depth of vision, feeling and life that he now urgently needs to rediscover if he is to cope successfully with the ocean waves of technology, science and other modern mechanisms that threaten his very survival.

Man is a celebratory being. Celebration conveys a feeling of cosmic solidarity, of human fraternity and often of a divine accompaniment because of which all our actions are liturgical, meaningful and expressive, so that they express what is now and create what is about to be. Celebration is the awareness of the rhythms of life and the festive observance of their frequent repetition.

There are two practices that might be recommended. One is total silence and stillness, emptiness and nothingness, the active removal of all obstacles to let Spirit act unhindered. The other practice is the traditional morning and evening prayer, made of praise and arising from a mixture of awe and hope, contemplation and impulse to action. This prayer is human and concrete. It integrates in itself all aspects of human life on earth.

We stumble over the same stone and, as last year, we are once again faced with another great text (1,100 pages) of our master from Tavertet:

The Veda is one of the oldest corpus of religious literature of mankind, and is also one of the earliest literary documents of India (between 2000 and 1000 BC). It is one of the most fascinating manifestations of the Spirit, according to Raimon Panikkar. The Vedic epiphany is part of the heritage of humanity. Therefore, the best way to serve its most profound function is to share it in a spirit of fraternity with the whole of humanity. This is what Panikkar does with this great anthology of the Veda: he shares with the readers the best texts of the Vedic scriptures, duly contextualized and annotated.

This book proposes an authentic initiatory path that, following the rhythm of the life of the cosmos, leads us to the birth of the full Life in us. Anthropocosmic path that unfolds and is offered to us in six parts linked by a seventh, like a bouquet of living flowers, a knob of mantras (mantramanjarī):

In each part, chapter, section the Vedic texts appear, from the most ancient Veda through the Brāhmaṇa, the Āraṇyaka, the Upaniṣad up to the Bhagavad Gītā; a sequence that repeats itself again and again, in a sense that goes from an externalized and cosmic consciousness towards the awakening of an internalized consciousness that is discovering the less profound (ātman), but that finally can rest in the adual experience (advaita) of ātman-brahman, in a consciousness that can say and exclaim: Yes! Amen! Om!

Working with this text excited all the members of the seminar. A writing that dances, nothing to do with the dry philosophical-theological style of The Rhythm of Being, perhaps because in its writing, which lasted more than ten years, Panikkar had the invaluable collaboration of four women: Nelly Shanti, Mary Rogers, Bettina Baum and Maria Bidoli.

In short, an essential contribution for anyone interested in the Hindu tradition, but which will also be, in our country, an obligatory and fundamental reference for Sanskritist studies and Indian traditions, as is already the case with Oscar Pujol’s Sanskrit-Catalan Dictionary.