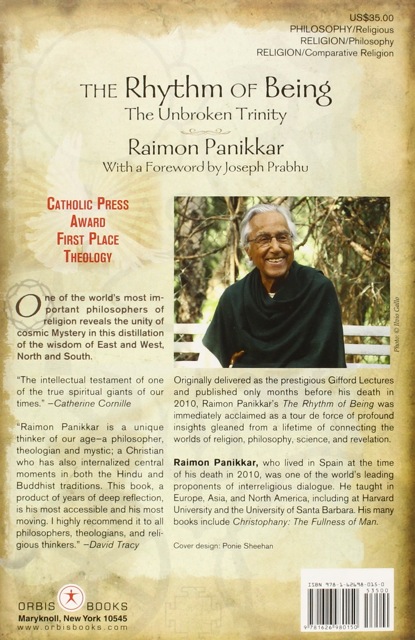 The rhythm of Being

Rhythm is more than the interconnectedness of things or events; it is their intraconnectedness, the fact of residing all in all.

Rhythm is precisely the dance of Being toward and around an elusive and probably untraceable Center.

If Being itself is Rhythm, the order is always new and does not follow a pre-existing or pre-ordained pattern. It is the continuous creatio.

Only when the heart is pure are we in harmony with the real, in tune with reality, we are able to feel its voice, detect its dynamism, and truly speak its truth, having adapted ourselves to the movement of Being, to the rhythm of Being.

In this course, for the first time, it was proposed to work on a text by Raimon Panikkar, on the occasion of the Catalan edition in his Opera Omnia of what is considered his philosophical testament -it was published in English in July 2010, just two months before his death:

Raimon Panikkar was the first Catalan, the first Spaniard and the first Indian to deliver the prestigious Gifford Lectures, the commission of which constitutes a kind of “Nobel Prize of thought”. Delivered in 1988-1989, the text of the lectures was reworked over a period of twenty years until its publication. It is Panikkar’s last great text, probably his most important book in the philosophical field.

Panikkar deepens his intuitions on the triadic or trinitarian structure of reality - comprising the divine, the human and the cosmic - which leads him to openly question monotheism and to see in harmony the open path towards the integral experience of the whole.

The study of this extensive and profound text, but of precise and clear writing, served for many members of the seminar to have a greater knowledge of Panikkar’s thought. Moreover, it was like a preparation for the International Symposium on Panikkar that the Ferrater Mora Chair was organizing and which was finally held in the spring of 2015.