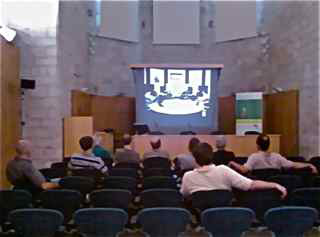 The great Hindu synthesis of the Bhagavad Gītā

There are two paths of perfection: one is the path of knowledge (jñānayoga), through meditation, and the other is the path of action (karmayoga). Sublime is the man who, free from all bondage has controlled his senses and mind and when he works he does so without any affection. Action is superior to inaction: perform, therefore, your task in life. (BG III, 7)

The man who in his action finds silence, and who sees that silence is action, this man indeed sees the Light and in all his actions finds peace. (BG IV, 18)

Consecrated to yoga, the sage realizes the ātmanin all beings and all beings in the ātman. This, he sees the same everywhere. And when he sees me in everything and sees everything in me, then I never abandon him and he never abandons me. (BG VI, 29-30)

In the 2009-10 academic year, we worked on Hindu thought, starting from the reading of the Bhagavad-gītā (circa 2nd century BC - 2nd century AD), a text that is considered the great synthesis of Hinduism and in which several schools are recognized. It is a section of the immense epic of the Mahābhārata and represents the first great Hindu philosophical-religious synthesis: Vedic sacrifice, devotional theism, the teaching of the Upanishads, the sāṃkhya and yoga, as well as a certain Buddhist imprint. An integral diversity that will make the Bhagavad-gītā the most commented work of the Indian tradition.

The text stages the dialogue between Arjuna and Krishna on the battlefield, just before beginning the fight against his kith and kin. On this field of Dharma, Arjuna hesitates. His actions will only lead to more pain and death; the order of things will be broken and nothing will make sense anymore. A whole world, his own, will collapse. Arjuna doubts, suffers, and anguishes for his and his world, and realizing the pain that lies in the heart of every being, he pities. Then dropping his bow and arrows Arjuna collapses in his chariot with his soul invaded by pain, he stops and asks Krishna for help and knowledge, seeking some light, a new consciousness, to be able to get out of the confusion and darkness. And Krishna will offer Arjuna a yoga to go beyond the vicious circle of compulsive action, beyond a karma that enslaves us: a wise action.

Although there are many versions, we work with the excellent bilingual edition:

The Bhagavad-gītā is a text that has been commented on by the great philosophers and sages of India to this day:

This work is accompanied by the reference texts:

During the course we made an open viewing in the Sala de Grados of this faculty of the TVE program Negro sobre Blanco (March 24, 2002) dedicated to the Bhagavad-gītā with the presence of experts Indologist.