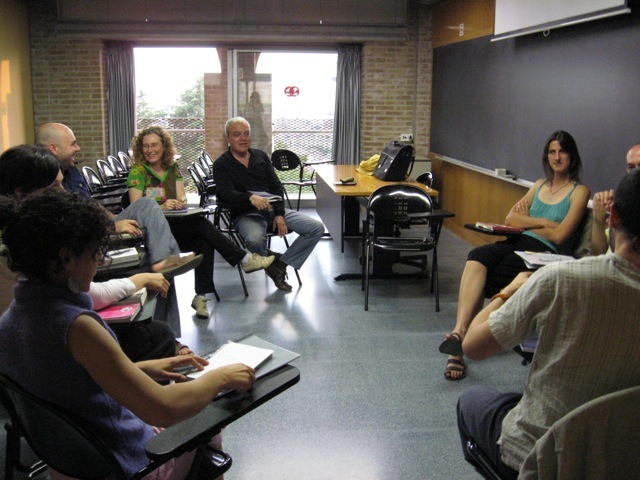 He who carefully examines perceptions of all kinds, past, present or future, his own or others’, thick or subtle, low or high, far or near, sees that, rightly looked at, they are empty, vacuous and without substance.

Whatever is matter, sensations, perceptions, mental activities and states of consciousness, he sees very well that all these are nothing but phenomena subject to impermanence (anicca) and suffering (dukkha), phenomena that are like a disease, a thorn, a pain, an affliction, an adversity, a faintness, a voidness (suññatā), phenomena without durable identity (Anattā). Seeing it thus, he turns the mind away, and concentrates it on the deathless element: this is peace, this is sublime: the completion of all that is composite, the abandonment of the foundations of existence, the annihilation of desire, detachment, extinction, nibbāna.

We begin the activity of this seminar by turning our attention to Buddhism. The bibliography is immense, and on the other hand very diverse, since the monographs can focus on the different schools, currents or families that throughout history have been configured within Buddhism.

Traditionally, three major currents or families are contemplated in Buddhism: the first Buddhism, which is finally fixed in writing in Pali, in Sri Lanka at the end of the first century BC, is therefore called the Pali Canon, but is also known as Theravāda (‘of the ancients’) or as Hīnayāna (‘small vehicle’). This last qualifier is put in a derogatory way by the second family of Buddhism that begins to appear precisely when the Pali Canon is fixed, the Mahāyāna (‘great vehicle’); this current will pass in China where it will form, among others, the Chinese chan that in Japan will be the well-known Zen. The third family called Vajrayāna (‘diamond vehicle’) and that will develop especially in Tibet when the eighth century arrives a Buddhism emerged from the tantric environments of India. This is also a Buddhism very - badly - known in the West since the arrival of the Tibetan monks exiled by the Chinese occupation and the prestige of the current Dalai Lama.

We decided to focus on the first Buddhism of the Pali Canon, as it is considered the closest to the teaching of the historical Buddha (‘awakened’), Siddhartha Gautama of the Shakya clan (circa 6th century BC).

And we took advantage of the fact that we had within reach the second edition of a very good tool, a brief but excellent anthology of texts of this early Buddhism in translation into Catalan directly from the Pali:

A well-known and celebrated anthology. Nyanatiloka Mahathera (1878-1957), a German who became a Buddhist monk in Sri Lanka, made this selection from the immense corpus of the Pali Canon in English and German, which was later translated into many languages.

Amadeu Solé-Leris makes the Catalan translation - the Buddhist texts directly from the Pali - and adds some indispensable and priceless notes.

We consider this annotated anthology one of the best ways to get into the essence of Siddhartha Gautama’s Buddhism. It is also recommended for totally profane people.

We accompany it with the reading of one of the best monographs on this early Buddhism:

On the other hand, it should be noted that meditative practice is considered one of the fundamental elements of Buddhism.

The meditative practice, mindfulness (satipaṭṭhāna) towards the body, sensations, breath, mind and mental contents lead us to the two pillars of this: samatha, calm, mental peace, tranquility, spiritual serenity; and Vipassana, integral vision, full intuition, correct understanding, contemplation of things as they are. Two pillars that perfect and ground each other: a pacified mind (samatha) leads to full vision (vipassanā), and vice versa, a right understanding of things (vipassanā) serenades the spirit (samatha).

There are two good monographs, now classics, regarding the meditative practice drawn in this early Buddhism of the Pali Canon:

Finally our friend Albert Parareda offers us a version of anecdotes, of “facts and words” of Buddha’s life that are found in the Pali Canon -and that conveniently annotated- want to transmit the teaching of Buddhism with the gestures, actions, words, examples of Buddha’s life:

It is said that Buddha, shortly before his death, gathered about one thousand five hundred monks and nuns in the city of Vesali to say goodbye. He was eighty years old and had a very lucid mind, as shown by the essential core of what he said on that occasion:

He does not accept anything I have said to you out of respect for my person. Before accepting what I have told you, you must analyze and examine it in the same way that a goldsmith analyzes gold, by rubbing it, cutting it or melting it. Do not accept my teachings without having experienced them.

Read here some texts on Buddhism - Pāli Canon and see also an outline of the Pāli Canon.