Willard van Orman Quine (Akron, Ohio, 1908-Boston, Massachusetts, 2000), was an American philosopher recognized for his work in mathematical logic and his contributions to pragmatism as a theory of knowledge.

Born in Akron, Ohio, he was educated at Oberlin College and Harvard University, where he was a pupil of Whitehead and where he became a professor in 1936. He also studied in Vienna, Warsaw and Prague.

According to Quine, the way the individual uses language determines what kind of things he is committed to say exist. In addition, the justification for speaking in one way instead of another, just like the justification for adopting one conceptual system and not another, is for Quine an entirely  pragmatic manifestation.

FROM STIMULS TO SCIENCE

The lessons of Prof. Quine were published in Catalan, titled De l’estímul a la ciència, (editorial Eumo, Vic, 1996.), in spanish with the title Del estímulo a la ciencia (editorial Ariel, Barcelona, 1998), and in english titled From Stimuls to Science (Harvard University Press, 1998). 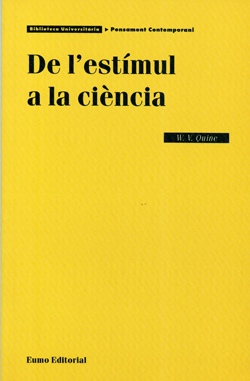 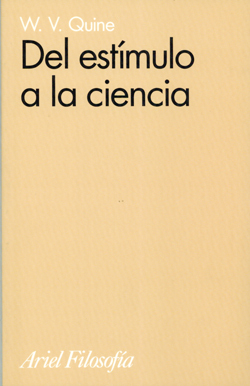