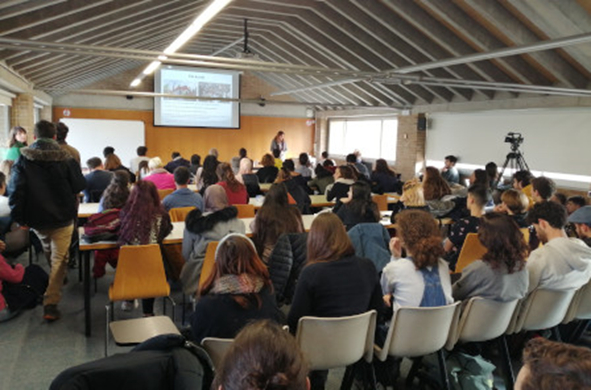 Lecture by Amina Hussein "Rojava: from the resistance and the struggle for survival"

On Wednesday, December 11, at the Faculty of Letters of the UdG, the Kurdish-Catalan journalist Amina Hussein gave the lecture “Rojava: from the resistance and the struggle to survive”, where she spoke about the dramatic situation that is now being experienced in Syrian Kurdistan. The conference was organized in collaboration with the Unit of Social Commitment of the University of Girona, and was attended by a large audience, mainly students of the UdG, in solidarity with the situation of the Kurdish people. The Vice Rector of Territory and Social Commitment, Dr. Silvia Llach, presented the conference.

The Kurdish-Catalan journalist was a direct witness of the Turkish bombings, the displacement of thousands of people and the occupation of houses to give them to Arab refugees. Amina Hussein spoke of the pain and outrage that the US withdrawal has caused the Kurdish people, who were instrumental in defeating the Islamic State.