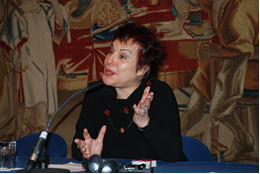 This cycle, which took place at the Fontana d’Or in Girona, aimed to deal with three themes that are permanently relevant: peace, Judaism and exile.

The first conference took place on 16 December 2010 under the title “Towards a culture of peace”, and was given by Arcadi Oliveras and Jordi Pigem. With these two outstanding peace activists, the guidelines that should be followed to get today’s society to abandon the permanent state of conflict to which it is subjected were set out. Arcadi Oliveres is a professor in the Department of Applied Economics at the UAB, an expert in world economics, a renowned activist for social justice and peace, and President of Justice and Peace. Jordi Pigem holds a PhD in Philosophy from the UB and is a leading peace activist, regularly contributing to periodical publications in Catalan, Spanish and English.

Two conferences were held in 2011: on 20 January, the conference “El exilio republicano del pensamiento” (The Republican Exile of Thought), given by Professor J. M. Murià, from the Colegio de Jalisco in Guadalajara (Mexico), reviewed the contribution of the Catalan exile in Mexico, a country to which many prominent Catalan intellectuals had to go into exile due to the repression following the Spanish civil war.

On 27 January, under the title “Les juifs dans la presse en Europe. De la Guerre des Six Jours à l’offensive de Gaza’, the third lecture in the series was given by the outstanding intellectual Esther Benbassa, Director of Studies at the Ecole Pratique des Hautes Études (Sorbonne, Paris). The event, which included simultaneous translation, was a great success with the public.

The conference aimed to provide an insight into the treatment of the Jewish question in the European press and public opinion over the last 50 years, and more specifically during the six-day war in Gaza (Palestine).

Here you can see the videos of the conferences.