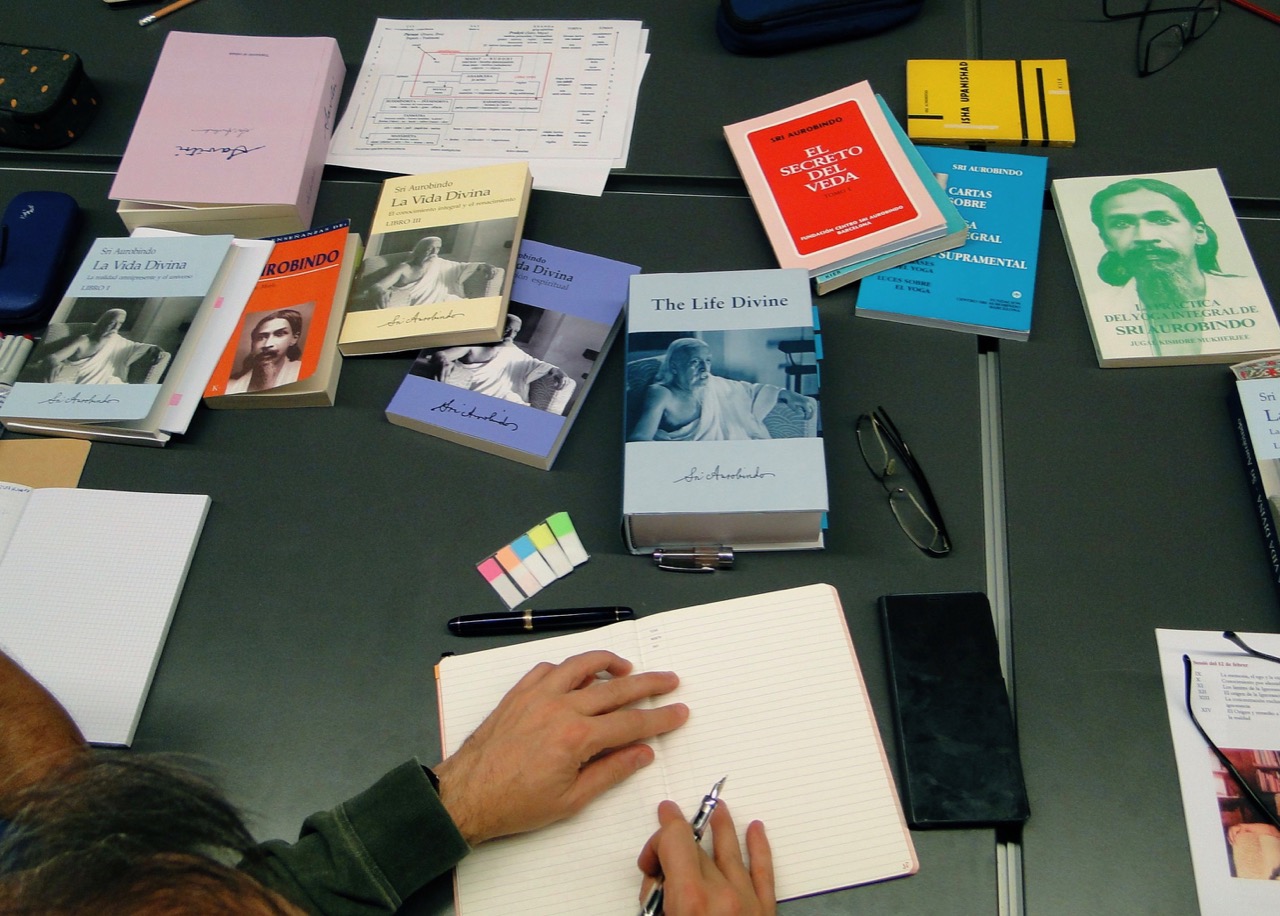 Sri Aurobindo: neither modernity without roots nor traditionalism without fruits

I have the impression that Aurobindo is nothing but the introduction of Christian themes still unknown in Hinduism (and partly also in Christianity): no individual salvation, but cosmic; no valuation only of the intellect, but of the body and of all human values (= Resurrection of the flesh). Evolution and return of Humanity towards God, higher state of consciousness.

This course we choose again another paradigmatic figure of intellectual, philosophical, spiritual and religious interculturality.

Śrī Aurobindo Ghose (Calcutta 1872 - Pondicherry 1950), a multifaceted figure whose life straddles East and West and the nineteenth and twentieth centuries. Framed in the Hindu tradition but of western formation; first in India and later in England (from the age of 7 years) where he will end up studying in London and Cambrigde (1884-1893) although excelling in culture and classical philology (Greek and Latin), and enthusiastic reader of the English romantic poets (Keats, Shelley, Byron, etc.), in addition to the knowledge of western science and philosophy.

He returned to India at the age of 21, where he became one of the political leaders in the struggle for independence, while writing poetry and initiating yoga, he had his first spiritual experiences; imprisoned for a year (1908) for his revolutionary activity, he deepened his inner realization. He was persecuted again (1910) and an inner voice encouraged him to go to Pondicherry, in the south of India, where he remained until his death. From his ashram Aurobindo -Philosophy, yogi, seer, sage- will develop his philosophical, literary, poetic, prophetic work…; with Ramana Maharshi he will end up being considered as the other great spiritual guide of contemporary India. In 1950 he was nominated for the Nobel Prize for Literature.

We have a good monograph in Spanish that we chose as preliminary reading:

The Vida Divina is the object of our study, a text of more than a thousand pages where a vision of the world as a manifestation of the Divine, the Self, the Consciousness-Force (Shiva-Shakti), Bliss, Bliss, Bliss, Infinity …, from the point of view of a realistic Vedānta advaita unfolds. The world is neither illusion nor a dream, nor shadows or appearance, but a reality fruit of the descent (involution), manifestation, development of the divine in a series of dimensions, which in a second movement of ascent (evolution), withdrawal, return to their source: matter, life, mind, mind, mind, consciousness, spirit. Double movement (involution-evolution) that structures the text in two books: 1) The omnipresent reality and the universe and 2) Knowledge and ignorance - Spiritual evolution; that is, cosmos-consciousness, object-subject, exteriority-interiority, ontology-epistemology.

The Vida Divina first appeared serially in the monthly magazine Arya between August 1914 and January 1919. Each installment was written immediately prior to publication. In 1939 and 1940 Sri Aurobindo revised the Vida Divina for publication as a two-volume book. Volume I was reproduced in 1943 and 1947, and Volume II in 1944. A one-volume edition was published in the United States in 1949. New editions were published in India in 1955, 1970 and 2001, and in the United States in 1990. The 1970 and 1990 editions were reprinted many times.

Of this edition we have a recent and good Spanish translation:

In Spanish there is a first translation of an English edition of 1965 by Hector V. Morel in 3 vols., A Kier, Buenos Aires, 1971, with several reeditions.

Long text of a vast vision, written from an intercultural point of view, with a poetic-mantric cadence and at the same time with great intellectual penetration, which demands a decided ascetic-initiatic attitude on the part of the reader. An impetuous current in which it is difficult not to drown. Like Nietzsche’s “mad man”, he has surely planted himself too early in the center of the square.

An allegedly integral philosophy of synthesis between East and West, science and spirituality, philosophy and religion …, often compared with Teilhard de Chardin, as well as with other Western authors; in the same Raimon Panikkar Fund of the Biblioteca del Barrio Viejo (UdG) we find the following monographs:

You can consult the website of the Sri Aurobindo Center Foundation of Barcelona, which has been publishing in Spanish a good part of his work, including a recent Catalan edition of the great epic poem Sāvitrī.

Here you will find the program of the course.