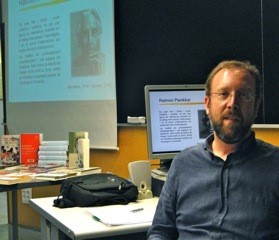 Krishnamurti in the work and in the Panikkar Library

Second of the readings on the occasion of the celebration of the Raimon Panikkar Year, given by Emili Puig Vilaró, teacher, social educator and graduate in Psychopedagogy. He works as a teacher of FP of Sociocommunity Intervention and Associate Professor in the Faculty of Education and Psychology at the University of Girona. PhD in Education. Visiting Professor at the University of Calcutta and Visva-Bharati University. Knowledgeable and passionate about the work of Jiddu Krishnamurti. The reading took place on Wednesday, April 25, 2018.

The main overlaps between Jiddu Krishnamurti and Raimon Panikkar regarding his life and thought were discussed in broad strokes. Also of Panikkar’s annotations that are in Krishnamurti’s books found in the UdG Library Catalog.

This research has generated a document that has served as a script for the session, with a first exposition and subsequent colloquium. We would like this document to serve as a basis and stimulus for future studies on these convergences between Panikkar and Krishnamurti.

According to Panikkar, “Krishnamurti, as he himself said, is not the answer. But he is the question. K’s life remains a constant challenge for our times, a living example of the constitutive quest of the human condition.”

See here the video of the session.

See also the interview -almost unpublished- to Raimon Pannikkar made by Alexis Racionero in April 2004, where at the beginning Panikkar talks a little about his relationship with Krishnamurti.