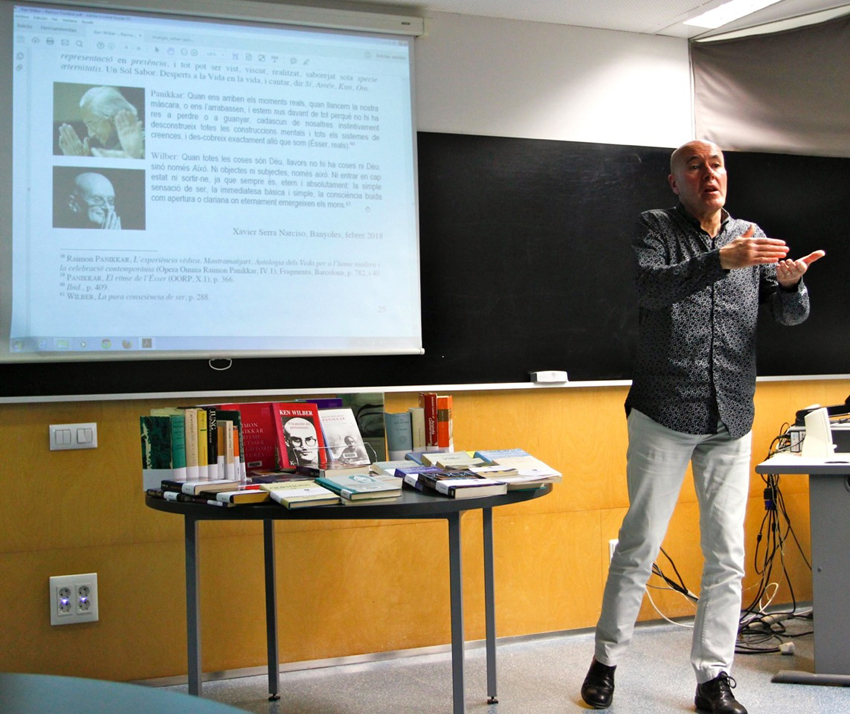 First of the readings on the occasion of the celebration of the Raimon Panikkar Year which were given by Prof. Xavier Serra Narciso, Emeritus Professor of Secondary Philosophy, and took place on March 7, 2018.

In the Library Fund there are two books by Wilber partially underlined by Panikkar - one of which Panikkar quotes in his La puerta estrecha del conocimiento[2005] - and that means that he was aware of this great author of transpersonal psychology.

On the other hand Wilber, in one of his last books, refers to the “very interesting work of Panikkar” with respect to the renewal of Christianity.

Although their work develops independently of each other, the emptying of Wilber’s texts worked by Panikkar, has served as a basis for us to look for some of the obvious parallels and coincidences that are found, and that we have framed in the following points: “Ambition of synthesis and a holistic and integral vision”, “Theanthropocosmic intuition: God, man, cosmos. Kosmos: heaven, humans, earth”, “The evolution of consciousness” and “The three eyes of knowledge. Fields of onto-logical experience”.

This research has generated a document that has served as a script for the session, with a first presentation and subsequent discussion. We would like this document to serve as a basis and stimulus for future studies on these convergences between Panikkar and Wilber.

See here the video recording of the session.