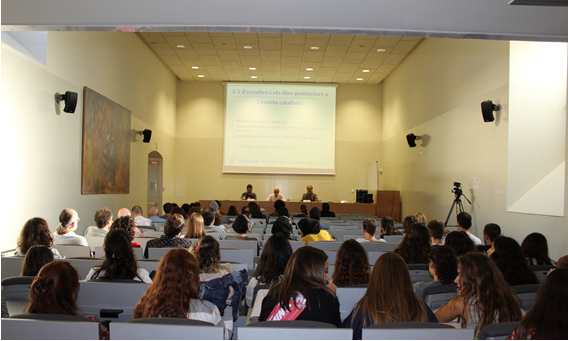 On 8 October 2018, in the Auditorium of the Faculty of Education and Psychology of the UdG, a conference was organised to reflect on the relationship between pedagogy and politics, the world and school, under the title “Democracy, politics and education: 1 October at school”. The conference was aimed at teaching professionals, students, PAS of the UdG and the general public.

This conference had a twofold objective: to discuss the relationship between politics and education without complexes, the need for everyone to have the ability to understand the world they live in and to participate actively; and to dismantle the ill-intentioned slanders that have been made about the Catalan school and teachers.

With this conference we also wanted to support the school model, which we have been building for many years together, and the teaching professionals who make it possible.

The event was structured around two round tables: the first on 1 October and the days after the Catalan school, and the second on Education and politics in the light of pedagogical thought.

The event was attended by Quim Salvi, Rector of the University of Girona, Montserrat Vilà, Dean of the Faculty of Education and Psychology and Jordi Haga and Xavier Besalú, coordinators of the Conference.